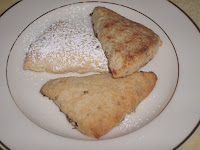 Good morning afternoon, friends.  My day is sneaking away so fast.  I thought I'd join Mama Hen and Little Chick for Smile Sunday today because despite all of the chaos of the past week, I've had several reasons to smile.  When I worked the concession stand at the BallPark last week, a handsome young man (I'd say about college age) called me "sweetheart" when I handed him his order.  Do you know how long it's been since anyone called me "sweetheart"?  Okay, so he probably called everyone sweetheart since we don't have nametags, or it might've had more to do with the fact that he had a half-empty cup of beer in his hand.  Either way, I was flattered just the same.  Another patron stopped by in search of jalapeno peppers for his nachos which he had purchased elsewhere.  I gladly offered him a cupful of peppers.  He asked how much, and I told him "just your gratitude."  (People aren't used to getting anything for free at the ballpark!)  He was overjoyed and thanked me profusely.  I couldn't help but smile.  Then, my Hubby just cracks himself up sometimes and emits this crazy belly laugh at his own jokes.  That cracks me up and makes me smile, too.  My son's high school football team (which I might add is also my alma mater) won their first football game of the season 49-48 in overtime Friday night.  I might have done a little more than smile at that one.  Woo-hoo!  I'm sure there's more to write about, but in the interest of time, I will share a recipe that is sure to make you smile:

Preheat oven to 400 degrees F. In a small bowl whisk together milk and sour cream; set aside.  In a medium bowl combine flour, sugar, baking powder and salt.  Using a pastry blender or 2 butter knives, cut in butter until mixture resembles coarse crumbs.  Stir in raisins and milk mixture.  Turn dough onto lightly floured surface, roll out to 1/4 inch thickness.  Using a 3-inch biscuit cutter or cookie cutter, cut out desire shapes; place on greased baking sheet.  Sprinkle with additional sugar.  Bake 12-15 minutes or until lightly browned.  Serve warm.  Yields: 12 tender, slightly sweet scones.
**Eastlyn's tips:
I always type the recipe as I found it then add my own 2 cents...I poured about 1/2 cup hot water over the raisins before I started and let them soak to "plump" back up.  Then, I drained them, patted them dry and chopped them (My daughter doesn't like raisins, so I thought if they were fine enough, maybe she'd at least be willing to try them--no such luck, even after all the extra work!)
The dough was a little sticky when I first turned it out of the bowl so I sprinkled some extra flour on top of it before I started to knead/pat it on the floured counter.  If you're using a dark pan, you may wish to lower the temp by 25 degrees (my scones browned a little on the bottom).  How do you call something "sunrise" and not have a hint of citrus flavor in it?  I added some grated orange peel to the milk/sour cream mixture, and it added just the right touch of "sunrise" flavor.  You could probably substitute lemon zest.  Instead of using a biscuit or cookie cutter, I used my pizza cutter to cut the dough into squares & then on the diagonal to make triangles.  I sprinkled some of the scones with cinnamon sugar prior to baking and some with powdered sugar after they came out of the oven. A powdered sugar & milk glaze would probably have worked well, too.
Bon apetit and Happy Smile Sunday to you all.  Until next time...
Posted by Eastlyn and co. at 11:06 AM